Don't Settle For Anything Less Than The Life You Have Dreamed Of Living.

In fourth grade my friend Amy told me that the stack of Cosmopolitan Magazines at her house were from her aunt who lived in New York City. 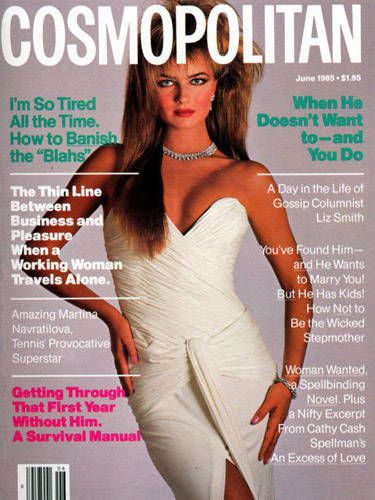 She gave them to Amy when she was done reading them. Now remember, perusing Cosmopolitan Magazine at age 9 wasn’t exactly the most appropriate of reading materials, (see above image of actual magazine cover from around that time) but it wasn’t the sex quizzes or the articles on molding yourself into what a man wants, (even back then I despised those articles) for me, the magic was the fashion. I remember Amy and I looking at all of these wild outfits, (well – wild for a small-town girl who’s clothing consisted of whatever fit at the time) and saying, “does anyone actually wear this stuff?”

Her nonchalant response was, “My aunt does. All the time. She buys what the magazine features and wears them to work.”

Now, if this were a movie, this would be the moment that the camera is closing in on my face and literal angels could be heard singing while my face was bathed in white light with a single tear slowly making its way down my face, glinting ever so gently as it glides.

Honestly, the year before (3rd grade) when the teacher asked us what we wanted to do when we grew up, I said I wanted to move to New York City and be a fashion designer. I distinctly remember three boys and one girl (I will not name names but trust me, I remember them.) pointing and laughing at me. In my mind it went on longer than necessary while I stood there with my hand on my hip staring into their eyes like a psychopath until they stopped. Inside I was crushed. I thought "oh, I guess that’s not a real thing. I must be an idiot for drawing all of those dresses and hats, they were apparently just the doodles of a bored kid not meant for anything else but life in a cubicle apparently."

I felt like an immature child who still believed in Santa when the other kids knew the truth.

Fast forward many, many, many, (many) years. Oh, I moved all right, just everywhere except New York. And I worked in fashion briefly, but life intervened and I had to take a different path to make ends meet for some years. But despite all that, somehow, I was lucky enough to find my way back to the career I was meant for. It may not be in the city that never sleeps, but returning for fashion week twice a year is magical enough that I don’t actually want to live there. It would ruin it for me by making it real.

Getting invited to my first real fashion show was such a monumental moment, I remember thinking, “if nothing comes out of this, I will always have the memory of being invited.” (cut to years later when it’s not an option to attend only one show a day, but at least 4-6, running from place to place, trying not to be late.)

Here’s how that first fashion show went: I distinctly remember walking up to the building. It was freezing out, my feet were killing me from the walk, but I did not care. I was so early that the security guards out front were pointing me in the direction of the back entrance where the VIP’s went. I dare say my hands were shaking. I remember feeling so out of place, so worried that someone would find out that I didn’t belong there. (Imposter Syndrome was REAL back then) When I finally stalked the building enough and they were letting people in – I casually walked around the corner like, “oh, is it time?” Waiting in line was excruciating. I was so worried someone was going to tell me too bad lady and no –you weren’t going to get to go in. I tried to hide behind a girl I thought looked stylish and confident. Maybe they would just think I’m her (older) friend and let me slide by.

When they finally opened the doors to the show, I was escorted to the 2nd row and given a swag bag. I sat down and kept thinking at any moment someone was going to tell me that I was standing room only and can I please move out of that seat. I sat ramrod straight and tried not to stare at what was happening around me. The celebrities peppering the runway taking selfies, models just casually talking amongst themselves, music pumping, photographers calling instructions…I was shocked. I was afraid to move at all.

Then it happened. The lights went down. The music started. And as the first look made its way down the runway, the tears made their way down my cheeks, almost as if they were choreographed. Seeing the fabric up close, the intricacies of the sewing, the way the looks were put together, it was overwhelming. I was so grateful of the dark, because I was on the verge of all out crying, but in the best way possible. That first show, that first look, that first glimpse of the fabric, now that, THAT was one of those moments I will never forget as long as I live.

These are some images from the very first looks that came down the runway. My hands were shaking so the camera wasn't as steady as it could have been! Here we are today a couple years later, and I’m planning another fashion week tour. This time for Paris 2020. My clients will get to experience multiple fashion shows in Paris, haute couture private tours, drink in the city of lights and all of its splendor…but the real motivation for me, the real reason I do what I do, is to see that pivotal moment on another person’s face. I believe in supporting dreams, not tearing them down. I believe that you really can do anything you set your mind to. I believe we are meant to be happy. And if seeing the living art that is a fashion show makes you happy, I’m here to help.

For more information on the different cities we offer shopping, fashion, and culinary tours email me at marla@bluevelvetcurtain.com

Sign up for updates on events, styling tips, and secret sales.

Use this popup to embed a mailing list sign up form. Alternatively use it as a simple call to action with a link to a product or a page.

By clicking enter you are verifying that you are old enough to consume alcohol.

Your cart is currently empty.